Abstract: This webinar begins by discussing key industry / societal trends and their impacts. To realize greater benefits from Intel-ligent Electronic Devices (IEDs) the two types of data within the IED, operational and non-operational, must be managed differently. The Internet of Things (IoT) and its benefits, and examples of new groups of analytics being developed, will be discussed. The importance of convergence of the Operations Technology and Information Technology groups within a utility is emphasized, and its enablement of enterprise data management. The importance of grid modernization indus-try standards to facilitate integration and interoperability is critical for success. Lastly, the use of new sources of data – unmanned aerial vehicles (UAVs) and robotics – will be described, available data identified, use of the data shown, and data management principles to be implemented discussed.

John D. McDonald, P.E., is Smart Grid Business Development Leader for GE’s Grid Solutions business. John has 46 years of experience in the electric utility industry. John joined GE on December 3, 2007 as General Manager, Marketing for GE Energy’s Transmission and Distribution business. In 2010 John accepted the new role of Director, Technical Strategy and Policy Development for GE Digital Energy. In January 2016 John assumed his present role with the integration of Alstom Grid and GE Digital Energy to form GE Grid Solutions.
John was elected to the Board of Governors of the IEEE-SA (Standards Association), focusing on long term IEEE Smart Grid standards strategy. John was the Chair of the Smart Grid Interoperability Panel (SGIP) Governing Board for 2010-2015 (end of 1Q) coordinating Smart Grid standards development in the US and global harmonization of the standards. John is a past member of the NIST Smart Grid Advisory Committee and Chair of its Technical Subcommittee.
John is Past President of the IEEE Power & Energy Society (PES), Finance Committee Chair of the Smart Energy Consumer Collaborative (SECC) Board, the VP for Technical Activities for the US National Committee (USNC) of CIGRE, and the Past Chair of the IEEE PES Substations Committee. He was on the IEEE Board of Directors as the IEEE Division VII Director. John is a member of the Advisory Committee for the annual DistribuTECH Conference, on the Board of Directors and Executive Committee of the GridWise Alliance and Finance Chair, Past Vice Chair of the Texas A&M University Smart Grid Center Advisory Board, and past member of the Purdue University Strategic Research Advisory Council. John received the 2009 Outstanding Electrical and Computer Engineer Award from Pur-due University.
John teaches a Smart Grid course at the Georgia Institute of Technology, a Smart Grid course for GE, and substation automation, distribution SCADA and communications courses for various IEEE PES local chapters as an IEEE PES Distinguished Lecturer (since 1999). John has published 150 papers and articles in the areas of SCADA, SCADA/EMS, SCADA/DMS and communications, and is a registered Professional Engineer (Electrical) in California, Pennsylvania and Georgia.
John received his B.S.E.E. and M.S.E.E. (Power Engineering) degrees from Purdue University, and an M.B.A. (Finance) degree from the University of California-Berkeley. John is a member of Eta Kappa Nu (Electrical Engineering Honorary) and Tau Beta Pi (Engineering Honorary), a Life Fellow of IEEE (member for 49 years), and was awarded the IEEE Millennium Medal in 2000, the IEEE PES Excellence in Power Distribution Engineering Award in 2002, the IEEE PES Substa-tions Committee Distinguished Service Award in 2003, the IEEE PES Meritorious Service Award in 2015, the 2016 CIGRE Distinguished Member Award and the 2016 CIGRE USNC Attwood Associate Award.
John has co-authored five books and has one US Patent: Automating a Distribution Cooperative from A to Z: A Primer on Employing Technology (National Rural Electric Cooperative Association – 1999); Electric Power Substations Engineering (Third Edition) (CRC Press – 2012); Power System SCADA and Smart Grids (CRC Press – 2015); Big Data Application in Power Systems (Elsevier – 2017); Smart Grids: Advanced Technologies and Solutions (Second Edition) (CRC Press – 2018); and US Patent (9,853,448) on Systems and Methods for Coordinating Electrical Network Optimization (December 26, 2017). 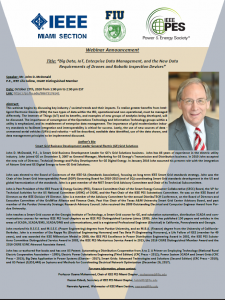