You are at:Home»Esrl events»Webinar on Advanced methods for condition monitoring of electric motors based on transient analysis
By Namrata Pravin Agrawal on October 19, 2020 Esrl events, Featured Stories, News

Title: “Advanced methods for condition monitoring of electric motors based on transient analysis”

Abstract: Condition monitoring of electric motors has gained an increasing attention in industry over recent years. Its advantages versus the monitoring of other quantities (non-invasive nature, remote monitoring of the motor condition, simplicity, broad fault coverage…) makes it a very interesting option in predictive maintenance programs of industrial electric motors. In this context, over recent years, recent technologies relying on the analysis of different electrical quantities (currents, fluxes) under transient operation of the motor have been proposed. These modern technologies significantly improve the performance of the classical methods and open new paths for the research in the area. This lecture is intended to explain the foundations of these new technologies based on transient analysis of electrical quantities, emphasizing their advantages versus the classical methods (such as MCSA). Different case stories referred to industrial motors of different typologies in which these new technologies have yielded successful results will be presented.

Jose Antonino-Daviu (S’04-M’08-SM’12) was born in Valencia, Spain, in 1976. He received his M.Sc. and Ph.D. degrees in Electrical Engineering, both from the Universitat Politècnica de València, Valencia, Spain in 2000 and 2006, respectively and the Ms. Degree in Business Administration and Management from the Universitat de Valèn-cia, Valencia, Spain, in 2012. He worked for IBM, being involved in several international projects. He is currently Associate Professor in the Department of Electrical Engineering of the Universitat Politècnica de València, where he develops his docent and research work. He is also Secretary of the mentioned Department.
His primary research interests are condition monitoring of electric machines, signal processing and its application to fault diagnosis as well as design and optimization of electrical installations and systems. His main achievement is the development of techniques for the reliable diagnosis of the rotor condition in electric motors; these innovative techniques rely on the analysis of machine’s currents during transient operation. He has been invited professor in Helsinki University of Technology (Finland) in 2005 and 2007, Michigan State University (USA) in 2010, Korea University (South Korea) in 2014, Université Claude Bernard Lyon 1 (France) and Coventry University (2016). He has taught seminars in several Universities all over the world, such as AGH University of Science and Technology of Krakow (Poland), Helsinki University of Technology (Finland), Michigan State University (USA), University of Korea (South Korea), Université Claude Bernard Lyon 1(France),Coventry University (U.K.). Moreover, he has established important collaborations with important companies where his techniques have been applied. He has taught technical courses for international companies as BASF DE (Germany), GENERAL ELECTRIC (Europe), KARSTEN MOHOLT (Norway), REPSOL (Spain)…and given technical talks in many other companies (SABIC (Netherlands), BRITISH PETROLEUM (Spain), UBE CHEMICAL (Spain), FYM ITALCEMENTI (Spain). He is co-author of more than 200 papers published in technical journals (>80 papers) and conference proceedings (>120). He is also co-author of 1 international patent. These works have received more than 4600 citations to his works. Since 2012, he is IEEE Senior Member. He is Associate Editor of IEEE transactions on Indus-trial Informatics, IEEE Industrial Electronics Magazine and IEEE Journal of Emerging and Selected Topics in Industrial Eletronics. He has been special session organizer as well as session chair in different IEEE conferences (IECON, ICEM, ICELIE, INDIN…) and he acts as reviewer for several IEEE journals as well as for other international publications. He was recipient of the IEEE Second Prize Paper Award of the Electric Machines Committee of the IEEE Industry Applications Society. He was also awarded with the Best Paper Award in the conferences IEEE ICEM 2012 and IEEE SDEMPED 2011 and he was awarded with the ‘Highly commended recognition’ of the IET Innovation Awards in 2014 and in 2016. He has been general co-chair of IEEE SDEMPED 2013 and is member of the Steering Committee of IEEE SDEMPED and of ICEM.
In 2016, he was awarded with the ‘Medal of the Spanish Royal Academy of Engineering’ for his contributions in new techniques for predictive maintenance of electric motors (2016). In 2018, he received the Nagamori Award (Kyoto, Japan) for his work in transient analysis applied to electric motors. In 2019, he obtained the SDEMPED Diagnostic Achievement Award (Toulouse, France) for his works in condition monitoring of electric motors. 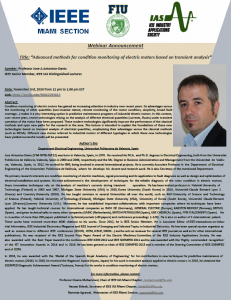