You are at:Home»Featured Stories»Mohammadreza Barzegaranbaboli receives the outstanding doctoral degree award of Florida International University
By Website Admin on May 6, 2014 Featured Stories

Working with his major research advisor Professor Mohammed, Mr. Barzegaran has excelled on a challenging federally funded multidisciplinary project during his PhD research here at FIU. He put serious efforts in designing novel equivalent source models of power components for evaluating their low frequency conducted and radiated electromagnetic fields. This is a very important issue in the development of products and energy systems. His work has already resulted in the publication of ten journal articles in IEEE Transactions and other journals in addition to eighteen high quality IEEE and other major conference papers. His work has been cited more than forty times by others at this early stage of his research career. One of his papers has recently won second place in the student paper competition at the 30th Annual Applied Computational Electromagnetic Society conference. Mohammadreza has also been awarded top honors for three other student paper competitions nationally and internationally and was awarded one semester the DEA fellowship from the FIU graduate school.
Mohammadreza is one of our top students with a high GPA of 3.9. Nonetheless, he has been active in professional societies. He is a member of the IEEE and several of its societies. He served several years on the technical committee for conferences in his field of expertise.

He also served as a reviewer of major journals such as the IEEE Transaction on Energy Conversion, IEEE Transaction on Magnetics, ACES journal, Taylor and Francis, AJEEE and also IEEE major conferences including ECCE, APEC, EMC, PES among others. He has served as mentor for masters and undergraduate students at the Energy Systems Research Laboratory at the College of Engineering and Computing.
Mohammadreza has been recently offered a tenure-track assistant professor position from two different state universities and he will soon choose one of them. 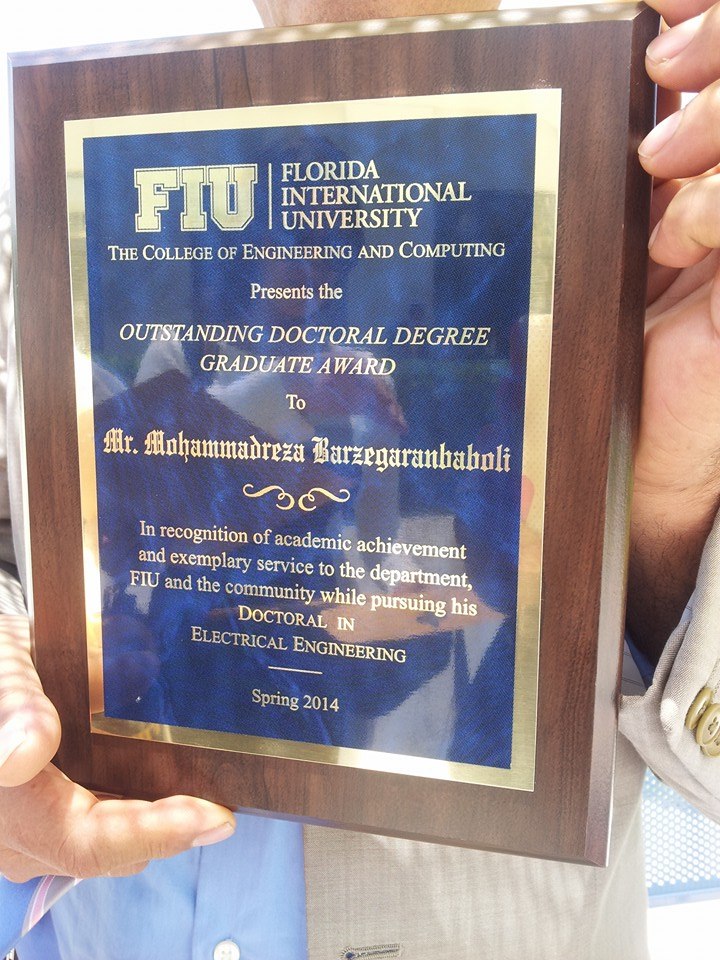