Mohammadreza Barzegaran , who just defended his Ph.D., received the “2nd Best Student Paper Award” at the 30th Applied Computational Electromagnetic Society (ACES) Annual Conference which was held in Jacksonville Florida, March 23-28, 2014. The 30th international conference brought together researchers from academy, industry, and national labs to discuss novel methods in computational electromagnetics in all aspects of electrical engineering. The student paper competition is one of the featured highlights of this event in the field of computational electromagnetics. The award was announced at the awards dinner on Wednesday March 26, 2014 and included a certificate and a $400 honorarium.

Mohammadreza’s paper “Combined Edge Modelling Technique for Electromagnetic Signature Study of the Large Direct Current Machines” earned him one of the conference’s top honors. The internationally recognized award was a product of key collaborations between Mohammadreza and his major Professor, Dr. Osama Mohammed.

Mohammadreza Barzegaran obtained B.S. and M.S. degrees in Power Engineering from University of Mazandaran, Iran in 2007 and 2010, respectively. He has just defended his Ph.D. degree in the department of electrical and computer engineering, Florida International University, Florida, USA. His research interests include studying condition monitoring and fault detection in electrical systems, electromagnetic compatibility in power components, life assessment of electrical power components, , and also computer-aid simulation of power components. He has many published papers in international
journals and conferences. 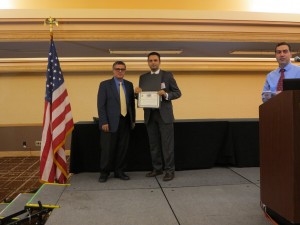