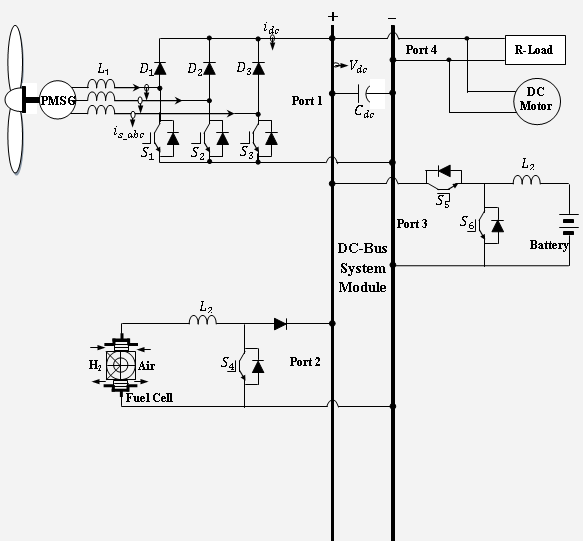 In this project, a performance analysis of a dc-bus voltage control for hybrid parallel-connected sustainable energy conversion system is presented. The hybrid system is the combination of fuel cell (FC), wind turbine, and battery storage via a common dc-bus. These hybrid sources are interfaced to dc-bus through high frequency-based power converters. The main advantages of the proposed topologies are: simplicity, robustness, and high efficiency due to high frequency converter operation as well as reduced number of elements. The complete operation for each converter and theoretical analysis were studied. The system was tested under two modes of operation, normal operation without use of battery (charging mode), and power dispatching which enables battery stored energy to be transferred to dc-bus (discharging mode). Experimental setup has been constructed and tested to validate the proposed system for hybrid sustainable energy conversion systems.
According to hybrid sources connectivity to dc-bus, the system can be described as a 4-port sustainable energy conversion system, see Fig., which consists of 4-main parts: The system has 3-input ports (sources) and 1-output port (loads). Two different types of dc-loads have been connected to dc-bus system. A 1-kW resistive load represents static load operation. The other load is a 3-hp dc-motor which represents a dynamic load operation.